Caloric Restriction Has a Protective Effect On Chromosomes

Friday, January 25, 2013 | By Unknown
According to a study carried out by a team led by María Blasco, the director of the Spanish National Cancer Research Centre (CNIO), a sustained lowering of food intake over time results in an increase of telomere length -- the ends of chromosomes -- in adult mice, which has a protective effect on the DNA and genetic material.
These beneficial effects on the youth of the chromosomes translate to a lower incidence of cancer and other age-related illnesses. 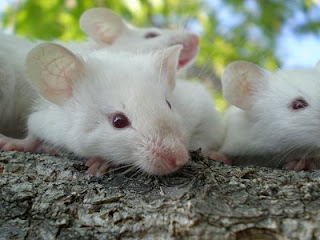 To carry out the study, researchers used young mice -- just three months old -- and reduced their caloric intake by 40% before observing them until the end of their life cycle.Mice that undergo caloric restriction show a lower telomere shortening rate than those fed with a normal diet. These mice therefore have longer telomeres as adults, as well as lower rates of chromosome anomalies.
To study the effects of this phenomenon on the health of the mammals, researchers observed the incidence of age-related illnesses like cancer. The mice that had been fed a lower calorie intake showed a reduction in the incidence of cancer. Furthermore, these mice also showed a lower incidence of other age-related illnesses such as osteoporosis, greater glucose uptake or improvements in motor coordination.
When the researchers carried out these same experiments with a variety of mice that produce more telomerase - a protein that lengthens telomeres and protects chromosomes --they observed that these mice not only enjoyed better health but also lived up to 20% longer.
Such significant increase in longevity is due to the protective effect against cancer produced by caloric restriction - incidents fall by 40% if  compare them with the mice that produce more telomerase and have a normal diet -- and, added to the presence of longer telomeres, this makes the mice live longer and better.
Despite the effects of caloric restriction depending on the genetic characteristics of each organism, this study opens the way to studying the effect other factors and lifestyle habits, such as smoking or exercise, might have on aging.
Furthermore, it is calculated that there are currently more than 10,000 people in the world on some form of controlled caloric restriction, so the observation of these individuals will be decisive in discovering the effects of this type of diet on humans.